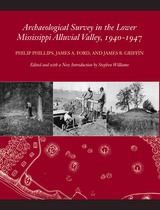 The Lower Mississippi Survey was initiated in 1939 as a joint undertaking of three institutions: the School of Geology at Louisiana State University, the Museum of Anthropology at the University of Michigan, and the Peabody Museum at Harvard. Fieldwork began in 1940 but was halted during the war years. When fieldwork resumed in 1946, James Ford had joined the American Museum of Natural History, which assumed co-sponsorship from LSU. The purpose of the Lower Mississippi Survey (LMS)—a term used to identify both the fieldwork and the resultant volume—was to investigate the northern two-thirds of the alluvial valley of the lower Mississippi River, roughly from the mouth of the Ohio River to Vicksburg. This area covers about 350 miles and had been long regarded as one of the principal hot spots in eastern North American archaeology.

Phillips, Ford, and Griffin surveyed over 12,000 square miles, identified 382 archaeological sites, and analyzed over 350,000 potsherds in order to define ceramic typologies and establish a number of cultural periods. The commitment of these scholars to developing a coherent understanding of the archaeology of the area, as well as their mutual respect for one another, enabled the publication of what is now commonly considered the bible of southeastern archaeology. Originally published in 1951 as volume 25 of the Papers of the Peabody Museum of American Archaeology and Ethnology, this work has been long out of print.

Because Stephen Williams served for 35 years as director of the LMS at Harvard, succeeding Phillips, and was closely associated with the authors during their lifetimes, his new introduction offers a broad overview of the work’s influence and value, placing it in a contemporary context.
AUTHOR BIOGRAPHY

Philip Phillips, James A. Ford, and James B. Griffin are all deceased. Stephen Williams is Peabody Professor of American Archaeology, Emeritus, at Harvard University and author of Fantastic Archaeology.