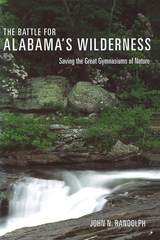 The grassroots effort to preserve Alabama's Wilderness Areas spanned thirty years, from 1967 to 1997. The first battle, to establish the Sipsey Wilderness in the Bankhead National Forest, was the catalyst for reform of national policy regarding public land preserves in the eastern United States. It, and the later campaigns—to establish the Cheaha Wilderness, to enlarge the Sipsey, and to create the Dugger Mountain Wilderness—are classic tales of citizen activists overcoming the quagmire of federal bureaucracy and the intransigence of hostile politicians. Early political opposition to proposed designation or expansion of wilderness areas in Alabama was based on the belief that limiting development of these lands would negatively impact the state's powerful timber industry. In response to such opposition, serious environmental activism was born in Alabama.

Using newspaper reports, Congressional testimony, interviews, and his own recollections, John Randolph traces the development of Alabama's environmental movement from its beginnings with the establishment of The Alabama Conservancy in the late 1960s and early '70s to the preservation efforts of present-day activist groups, such as the Alabama Environmental Council, the Cahaba River Society, and the Alabama Wilderness Alliance.

The Battle for Alabama's Wilderness permits all of the players—pro and con—to speak for themselves, but the heroes—people like Mary Burks, Blanche Dean, Joab Thomas, and Pete Conroy—embody the vision, hope, and persistence required of those who succeed in their preservation efforts. Randolph's account is a testament to the power of grassroots citizen groups who are committed to a common cause and inspired by a shared ideal.

AUTHOR BIOGRAPHY
John N. Randolph is a retired attorney-at-law, former executive director of the Alabama Conservancy, and president of the Birmingham Audubon Society.
REVIEWS
"A true story of Alabama's leadership role in the national movement for protecting America's remaining wilderness. The tireless efforts of a handful of Alabama environmentalists, together with the caring commitment of such political leaders as Ronnie Flippo, spearheaded a successful national campaign for wilderness protection that is today celebrated in the annals of American history."--Doug Phillips, author of Discovering Alabama Wetlands
— -

"John Randolph brings an expert's eye to the scene. . . . His book makes an original and significant contribution to the fields of environmental studies, Alabama and southern history, and sociology in that it focuses on the political and social strategies of grassroots organizing."--Suzanne Marshall, author of "Lord, We're Just Trying to Save Your Water": Environmental Activism and Dissent in the Appalachian South
— -