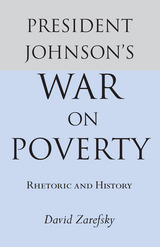 In January 1964, in his first State of the Union address, President Lyndon Johnson announced a declaration of “unconditional war” on poverty. By the end of the year the Economic Opportunity Act became law.

The War on Poverty illustrates the interweaving of rhetorical and historical forces in shaping public policy. Zarefsky suggest that an important problem in the War on Poverty lay in its discourse. He assumes that language plays a central role in the formulation of social policy by shaping the context within which people view the social world. By terming the anti-poverty effort a war, President Johnson imparted significant symbolism to the effort: it called for total victory and gave confidence that the “war” was winnable. It influenced the definition of the enemy as an intergenerational cycle of poverty, rather than the shortcomings of the individual; and it led to the choice of community action, manpower programs, and prudent management as weapons and tactics. Each of these implications involves a choice of language and symbols, a decision about how to characterize and discuss the world. Zarefsky contends that each of these rhetorical choices was helpful to the Johnson administration in obtaining passage of the Economic Opportunity Ac of 1964, but that each choice invited redefinition or reinterpretation of a symbol in a way that threatened the program.

David Zarefsky is Professor of Communication Studies and Associate Dean, The School of Speech, NorthwesternUniversity.

“Zarefsky’s concentration on the struggles fought over the symbols of the antipoverty effort makes for an engrossing analysis of the War on Poverty from a fresh angle of vision . . . [and] provides more than a cogent analysis of the War on Poverty. It is a valuable study of rhetoric and history, focusing our attention on how symbols define political situations and how they are modified over time in the face of new events and pressures. The author’s account of the Johnson administration’s rhetorical moves and modifications in the face of defeats in the ‘unconditional war’ declared in 1964 is particularly enlightening.”--American Historical Review

“Readers of this fine book will learn far more about the War on Poverty and the foibles of U.S. liberalism in the postwar period than they will about rhetoric. This is both a great service and a great mercy. Zarefsky’s effort is a gem. It uses rhetorical analysis to its best advantage: as a narrative thread rather than as an explanation.”-- Journal of Communication

"Provocative and subtly argued. . . an important and original study."-- Choice