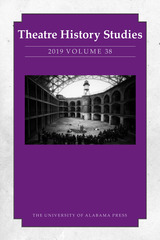 Part I: Studies in Theatre History

Hanswurst’s Public: Defending the Comic in the Theatres of Eighteenth-Century Vienna by Elizabeth Coen

“This Affair of a Theatre”: The Boston Theatre Controversy and the Americanization of the Stage by Bridget McFarland

From Moscow to Simferopol: How the Russian Cubo-Futurists Accessed the Provinces by Ryan Tvedt

So Long Ago I Can’t Remember: GAle GAtes et al. and the 1990s Immersive Theatre by Daniella Vinitski Mooney

A Walk in the Park: David Levine’s Private Moment and Ethical Participation in Site-Based Performance by Sean Bartley

“I Want You to Feel Uncomfortable”: Adapting Participation in A 24-Decade History of Popular Music at San Francisco’s Curran Theatre by David Bisaha

Navigating Neverland and Wonderland: Audience as Spect-Character by Colleen Rua

Part III: The Robert A. Schanke Award-Winning Essay from the 2018 Mid-America Theatre Conference

Inventing the Tramp: The Early Tramp Comic on the Variety Stage by Michelle Granshaw

Jonathan M. Hess, Deborah and Her Sisters: How One Nineteenth-Century Melodrama and a Host of Celebrated Actresses Put Judaism on the World Stage Reviewed by Joseph R. D’Ambrosi

George Rodosthenous, The Disney Musical on Stage and Screen: Critical Approaches from Snow White to Frozen Reviewed by Kathryn Edney

Lisa Jackson-Schebetta, Traveler, There Is No Road: Theatre, the Spanish Civil War, and the Decolonial Imagination in the Americas Reviewed by Andrew Gibb

Gilliam M. Rodger, Just One of the Boys: Female-to-Male Cross-Dressing on the American Variety Stage Reviewed by Franklin J. Lasik

Adrian Wright, Must Close Saturday: The Decline and Fall of the British Musical Flop Reviewed by Rae Mansfield