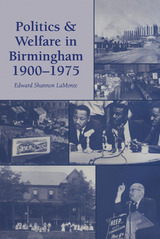 This well-written volume explores the relationships between politics and welfare programs for low-income residents in Birmingham during four periods in the twentieth century:

• 1900-1917, the formative period of city building when welfare was predominantly a responsibility of the private sector;
• 1928-1941, when the Great Depression devastated the local economy and federal intervention became the principal means of meeting human need;
• the mid 1950s, when the lasting impacts of the New Deal could be assessed and when matters of race relations became increasingly significant;
• 1962-1975, when an intense period of local government reform, the Civil Rights movement, federal intervention in the form of the War on Poverty, and increasing demands for citizen participation all reinforced one another.
From the time of its founding in 1871, Birmingham has had a biracial population, so the theme of race relations runs naturally throughout the narrative. LaMonte pays particular attention to those efforts to achieve a more harmonious biracial community, including the failed effort to establish an Urban League in the 1940s, the progressive activities of the Community Chest’s Interracial Division in the 1950s, which were abruptly terminated, and the dramatic events of the Civil Rights Movement in the 1960s, when local events were elevated to international significance.