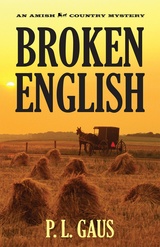 Broken English  is a tale of honor, deception, and revenge, one in which circumstances and the search for justice test the mettle of the closest of friends and reveal the desperate measures of the strongest of foes. Following on the critical and popular success of P. L. Gaus’ acclaimed Amish mystery series, this new edition of Broken English includes an exclusive interview with the author, discussion questions for reading groups, and a detailed map and driving guide to Holmes County, Ohio, with everything one needs to visit the iconic scenes depicted in the story.

The peaceful town of Millersburg, Ohio, in the heart of Amish country, is rocked by the vicious murder of a woman at the hands of an ex-convict. When a local reporter covering the story turns up dead, while the convict is already behind bars, suspicion falls on David Hawkins, the first victim’s father. With Hawkins nowhere to be found among the protective Amish community that had taken him in as one of its own, Professor Michael Branden, Sheriff Bruce Robertson, and Pastor Cal Troyer set out to uncover the elusive truth in this otherwise quiet corner of the world.

P. L. Gaus is the author of seven books in the Amish-Country Mystery series. He lives in Wooster, Ohio, an area that is close to the world’s largest settlement of Amish and Mennonite people. Gaus lectures widely about the lifestyles, culture, and religion of the Amish.