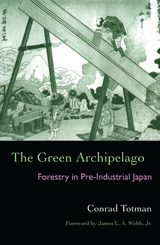 This inaugural volume in the Ohio University Press Series in Ecology and History is the paperback edition of Conrad Totman’s widely acclaimed study of Japan’s environmental policies over the centuries.

Professor Totman raises the critical question of how Japan’s steeply mountainous woodland has remained biologically healthy despite centuries of intensive exploitation by a dense human population that has always been dependent on wood and other forest products. Mindful that in global terms this has been a rare outcome, and one that bears directly on Japan’s recent experience as an affluent, industrial society, Totman examines the causes, forms, and effects of forest use and management in Japan during the millennium to 1870. He focuses mainly on the centuries after 1600 when the Japanese found themselves driven by their own excesses into programs of woodland protection and regenerative forestry.

Conrad Totman, retired from a career teaching Japanese history at Northwestern and Yale universities, is the author of several books, including Early Modern Japan and The Lumber Industry in Early Modern Japan.