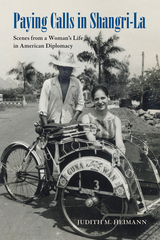 Judith M. Heimann entered the diplomatic life in 1958 to join her husband, John, in Jakarta, Indonesia, at his American Embassy post. This, her first time out of the United States, would set her on a path across the continents as she mastered the fine points of diplomatic culture. She did so first as a spouse, then as a diplomat herself, thus becoming part of one of the Foreign Service’s first tandem couples.

Heimann’s lively recollections of her life in Africa, Asia, and Europe show us that when it comes to reconciling our government’s requirements with the other government’s wants, shuttle diplomacy, Skype, and email cannot match on-the-ground interaction. The ability to gauge and finesse gesture, tone of voice, and unspoken assumptions became her stock-in-trade as she navigated, time and again, remarkably delicate situations.

This insightful and witty memoir gives us a behind-the-scenes look at a rarely explored experience: that of one of the very first married female diplomats, who played an unsung but significant role in some of the important international events of the past fifty years. To those who know something of today’s world of diplomacy, Paying Calls in Shangri-La will be an enlightening tour through the way it used to be—and for aspiring Foreign Service officers and students, it will be an inspiration.

Published in association with ADST-DACOR Diplomats and Diplomacy Series

Judith M. Heimann has spent most of her life involved with American diplomacy. She has written widely on Southeast Asia and the Pacific. She is the author of The Most Offending Soul Alive and The Airmen and the Headhunters, and coauthor of the award-winning PBS documentary based on the latter.

REVIEWS
“A unique look into Foreign Service life…[and] an exciting and educational read, particularly for anyone interested in a diplomatic career.”—Foreign Service Journal


“A marvelous view of a profession where the unexpected is the rule. This is real, sometimes funny, sometimes tragic, but always lively.”—Baron Frans van Daele, chief of staff to the Belgian king and former Belgian ambassador to the United States


“This is a wonderful memoir about Foreign Service life abroad and the author’s transition from Foreign Service wife to Foreign Service officer. She demonstrates how, by being out and about in the host country, you can sometimes be in the right place at the right time. For example, she shows how, with the wit and language to take advantage of a banal museum opening, it was possible to learn Soviet plans for East Germany from a firsthand source the day after the Wall fell.”—Phyllis Oakley, first Department of State spokeswoman and an early tandem diplomat

TABLE OF CONTENTS
Contents
Illustrations
Prologue
1: Political Apprenticeship in Africa
2: Paying Calls
3: Party Magic
4: Domestic Dramas
5: Diplomacy at the Dining Table
6: Learning to Drive a Bargain
7: Girl Talk
8: Swifts in the Eaves
9: Among Ex-Headhunters
10: A “Tandem” Wife on Trial
11: A Moment of Cold War Intrigue
12: Getting Out in Public
Gallery of photos
13: Latin Tags
14: Heroics in the Hinterland
15: Farewell to Africa
16: Back in the Heart of Europe
17: Being in Charge
18: Encores
19: Honesty, the Best Policy
Epilogue
Acknowledgments
Appendix
Index