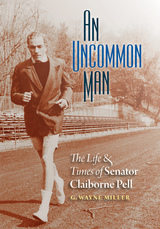 Claiborne Pell (1918–2009) was Rhode Island’s longest serving U.S. senator, with six consecutive terms from 1961 to 1997. A liberal Democrat, Pell is best known as the sponsor of the Pell Grants. He was also the force behind the creation of the National Endowment for the Arts and the National Endowment for the Humanities, and a visionary in high-speed rail transportation and other areas. An early environmentalist and opponent of the Vietnam War, Pell left his mark on several treaties and peace initiatives. Born into the wealthy family that settled the Bronx, New York, Pell married Nuala O’Donnell, an heiress to the A&P fortune. He lived on the waterfront in exclusive Newport, Rhode Island, yet was a favorite of blue-collar voters. Frugal and quirky, he believed in ESP and UFOs, and was often seen jogging in a sports coat and shorts. Both his hard work and his personality left an indelible mark on this small but influential state—and on America. This lively biography was written with the cooperation of the senator’s family, and with exclusive access to family records and the extensive archives at the University of Rhode Island.
AUTHOR BIOGRAPHY
G. WAYNE MILLER is a filmmaker, staff writer at the Providence Journal, and author of seven books.
TABLE OF CONTENTS