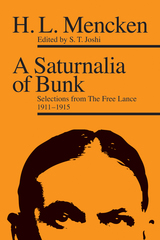 H. L. Mencken’s reputation as a journalist and cultural critic of the twentieth century has endured well into the twenty-first. His early contributions as a writer, however, are not very well known. He began his journalistic career as early as 1899 and in 1910 cofounded the Baltimore Evening Sun. The next year he initiated a column—The Free Lance—that ran six days a week for four and a half years, until the Sun discontinued it, partially in response to Mencken’s controversial defense of Germany during World War One.

In this early forum for his renowned wit, Mencken broached many of the issues to which he would return again and again over his career, establishing himself as a fearless iconoclast willing to tackle the most divisive subjects and apply a heady mix of observation, satire, and repartee to clear away what he regarded as the “saturnalia of bunk” that clouded American thinking. The Free Lance reveals Mencken at his scintillating best as a journalist, polemicist, and satirist.

These columns are collected here for the first time, edited and annotated by Mencken expert and critic S. T. Joshi. This extraordinary collection is an invaluable resource for Mencken scholars and fans and provides an entertaining immersion into the early twentieth-century American zeitgeist.

S. T. Joshi has edited several collections of Mencken’s writings, including H. L. Mencken on American Literature, Mencken’s America, and Mencken on Mencken: A New Collection of Autobiographical Writings. He is also an authority on literature of the supernatural and author of The Weird Tale, Unutterable Horror: A History of Supernatural Fiction, and other critical and biographical studies.

TABLE OF CONTENTS
Contents
Introduction
1: On Being a Free Lance
2: The Central Questions of Existence
3: The Follies of American Government and Society
4: The Bozart
5: Men, Women, and the Vote
6: The Bane of Religion
7: The Vice Crusade 1
7: The Vice Crusade 2
9: The Vice Crusade 3
10: Sundry Forms of Quackery
11: The Great War
Notes
Glossary of Names
Index