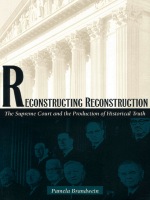 Was slavery over when slaves gained formal emancipation? Was it over when the social, economic, and political situation for African Americans no longer mimicked the conditions of slavery? If the Thirteenth Amendment abolished it in 1865, why did most of the disputed points during the Reconstruction debates of 1866–75 concern issues of slavery? In this book Pamela Brandwein examines the post–Civil War struggle between competing political and legal interpretations of slavery and Reconstruction to reveal how accepted historical truth was established.
Delving into the circumstances, assumptions, and rhetoric that shaped the “official” story of Reconstruction, Brandwein describes precisely how a dominant interpretation of events ultimately emerged and what its implications have been for twentieth-century judicial decisions, particularly for Supreme Court rulings on civil rights. While analyzing interpretive disputes about slavery, Brandwein offers a detailed rescoring of post–Civil War legislative and constitutional history, including analysis of the original understanding of the Fourteenth Amendment. She identifies the perspectives on Reconstruction that were endorsed or rejected by the Supreme Court. Explaining what it meant—theoretically and practically—to resolve Reconstruction debates with a particular definition of slavery, Brandwein recounts how the Northern Democratic definition of “ending” slavery was not the only definition, just the one that prevailed. Using a familiar historical moment to do new interpretive work, she outlines a sociology of constitutional law, showing how subjective narrative construction can solidify into opaque institutional memory.
AUTHOR BIOGRAPHY

Pamela Brandwein is Assistant Professor of Sociology and Political Economy at the University of Texas at Dallas.


“[A] welcomed . . . critique. . . . Professor Brandwein develops her thesis using an able study of how Americans from Reconstruction to the present have understood the events responsible for the passage of the post-Civil War Amendments.” - Mark A. Graber, The Law and Politics Book Review


“[W]ell-formulated, insightful, and timely. . . . Any sociologist interested in the origins, reproduction, and transformation of social hierarchies must come to terms with this crucial insight about law and patterns of social organization.” - Nicholas Pedriana, American Journal of Sociology


“Reconstructing Reconstruction is one of the finest meditations on history and law in recent years.” - Bryan H. Wildenthal, H-Net Reviews


&ldquo;An important call for the development of a &lsquo;sociology of constitutional law.&rsquo; Brandwein forces us to pay more attention to the ways in which the reconstruction of history (in this case, the history of Reconstruction) becomes a vital resource in contemporary constitutional politics.&rdquo;&mdash;Howard Gillman, University of Southern California

2. Slavery as an Interpretive Issue in the 39th Reconstruction Congress: The Northern Democrats