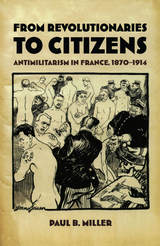 From Revolutionaries to Citizens is the first comprehensive account of the most important antiwar campaign prior to World War I: the antimilitarism of the French Left. Covering the views and actions of socialists, trade unionists, and anarchists from the time of France’s defeat by Prussia in 1870 to the outbreak of hostilities with Germany in 1914, Paul B. Miller tackles a fundamental question of prewar historiography: how did the most antimilitarist culture and society in Europe come to accept and even support war in 1914?

Although more general accounts of the Left’s “failure” to halt international war in August 1914 focus on its lack of unity or the decline of trade unionism, Miller contends that these explanations barely scratch the surface when it comes to interpreting the Left’s overwhelming acceptance of the war. By embedding his cultural analysis of antimilitarist propaganda into the larger political and diplomatic history of prewar Europe, he reveals the Left’s seemingly sudden transformation “from revolutionaries to citizens” as less a failure of resolve than a confession of commonality with the broader ideals of republican France. Examining sources ranging from police files and court records to German and British foreign office memos, Miller emphasizes the success of antimilitarism as a rallying cry against social and political inequities on behalf of ordinary citizens. Despite their keen awareness of the bloodletting that awaited Europe, he claims, antimilitarists ultimately accepted the war with Germany for the same reason they had pursued their own struggle within France: to address injustices and defend the rights of citizens in a democratic society.

Paul B. Miller is Assistant Professor of History at Western Maryland College.

REVIEWS
"Paul Miller has produced a fine book on antimilitarism in France from 1870-1914. . . . Miller has done an enviable job of ferreting out archival material. . . . Miller is to be commended." - Norman Ingram, H-France Book Reviews


"Paul B. Miller has made a very important contribution to our understanding of the antimilitarism and antiwar activism of the labor movement in France. . . . Its key contributions are a careful examination of the relationship between antimilitarist and antipatriotic movements, a meticulous account of how these groups delivered their appeals, and most important, an exacting evaluation of the actual strengths and weaknesses of antimilitarists. . . . Miller’s conclusion will inspire much debate, but even those who disagree will find that his work greatly advances their own." - Michael Forman, History: Reviews of New Books


"This is an interesting and solidly researched study that contributes to an important ongoing debate within European labor history." - Michael Hanagan, American Historical Review


“In this well-researched and in-depth analysis, Paul Miller successfully treats multiple viewpoints and highlights in a lively manner the various ‘affairs’ that mobilized public opinion in France before the outbreak of World War I.”—Nancy Green, author of Ready-to-Wear and Ready-to-Work: A Century of Industry and Immigrants in Paris and New York


"Miller has written a compelling study of antimilitarism in France that will no doubt rank as an important contribution to the field. The style of writing is clear, and the compelling narrative kept this reviewer anxiously turning pages, a rare feat in a scholarly monograph." - Lawrence H. Davis, Labour/Le Travail


"Miller makes a solid scholarly contribution to our understanding of French anti-militarist culture in general and the nuances between various tendencies in French socialism, anarchism, and revolutionary syndicalism. . . . [D]elightful." - Keith Mann, International Labor and Working-Class History


&ldquo;A powerful study of the tragic choices facing the French antiwar movement in the early twentieth century. Miller helps us see how, by 1914, the only way to fight war was to join it. This outcome, he demonstrates persuasively, was neither a betrayal of prior convictions nor a momentary response to a war crisis, the speed of which surprised all observers.&rdquo;&mdash;Jay Winter, Columbia University


1. Origins of War: The Roots of Antimilitarism in the Third Republic


4. Antimilitarist Militants: The Question of Commitment


6. Antimilitarist Wars I: The Battle Within


7. Antimilitarist Wars II: The Battle Without