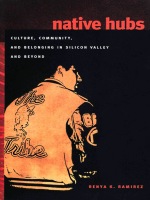 Most Native Americans in the United States live in cities, where many find themselves caught in a bind, neither afforded the full rights granted U.S. citizens nor allowed full access to the tribal programs and resources—particularly health care services—provided to Native Americans living on reservations. A scholar and a member of the Winnebago Tribe of Nebraska, Renya K. Ramirez investigates how urban Native Americans negotiate what she argues is, in effect, a transnational existence. Through an ethnographic account of the Native American community in California’s Silicon Valley and beyond, Ramirez explores the ways that urban Indians have pressed their tribes, local institutions, and the federal government to expand conventional notions of citizenship.

Ramirez’s ethnography revolves around the Paiute American activist Laverne Roberts’s notion of the “hub,” a space that allows for the creation of a sense of belonging away from a geographic center. Ramirez describes “hub-making” activities in Silicon Valley, including sweat lodge ceremonies, powwows, and American Indian Alliance meetings, gatherings at which urban Indians reinforce bonds of social belonging and forge intertribal alliances. She examines the struggle of the Muwekma Ohlone, a tribe aboriginal to the San Francisco Bay area, to maintain a sense of community without a land base and to be recognized as a tribe by the federal government. She considers the crucial role of Native women within urban indigenous communities; a 2004 meeting in which Native Americans from Mexico and the United States discussed cross-border indigenous rights activism; and the ways that young Native Americans in Silicon Valley experience race and ethnicity, especially in relation to the area’s large Chicano community. A unique and important exploration of diaspora, transnationalism, identity, belonging, and community, Native Hubs is intended for scholars and activists alike.

Renya K. Ramirez is Assistant Professor of American Studies at the University of California, Santa Cruz.

REVIEWS
&ldquo;Renya K. Ramirez makes compelling use of ethnographic interviews to explore broad issues of cultural citizenship and transnational migration. Her analysis of Laverne Roberts&rsquo;s notion of &lsquo;hubs&rsquo; connecting Native people across time and space is a significant contribution to the all too sparse scholarship on urban American Indian communities.&rdquo;&mdash;Susan Applegate Krouse, Director of the American Indian Studies Program, Michigan State University

1. Disciplinary Forces and Resistance: The Silicon Valley and Beyond 27

2. Gathering Together in Hubs: Claiming Home and the Sacred in an Urban Area 58

4. Who Are the “Real Indians”? Use of Hubs by Muwekma Ohlones and Relocated Native Americans 102

5. Empowerment and Identity from the Hub: Indigenous Women from Mexico and the United States 126

6. “Without Papers”: A Transnational Hub on the Rights of Indigenous Communities 155