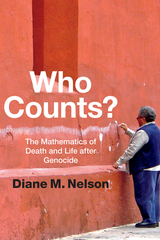 In Who Counts? Diane M. Nelson explores the social life of numbers, teasing out the myriad roles math plays in Guatemalan state violence, economic exploitation, and disenfranchisement, as well as in Mayan revitalization and grassroots environmental struggles. In the aftermath of thirty-six years of civil war, to count—both numerically and in the sense of having value—is a contested and qualitative practice of complex calculations encompassing war losses, migration, debt, and competing understandings of progress. Nelson makes broad connections among seemingly divergent phenomena, such as debates over reparations for genocide victims, Ponzi schemes, and antimining movements. Challenging the presumed objectivity of Western mathematics, Nelson shows how it flattens social complexity and becomes a raced, classed, and gendered skill that colonial powers considered beyond the grasp of indigenous peoples. Yet the Classic Maya are famous for the precision of their mathematics, including conceptualizing zero long before Europeans. Nelson shows how Guatemala's indigenous population is increasingly returning to Mayan numeracy to critique systemic inequalities with the goal of being counted—in every sense of the word.
AUTHOR BIOGRAPHY
Diane M. Nelson is Professor of Cultural Anthropology at Duke University and the author of A Finger in the Wound: Body Politics in Quincentennial Guatemala; she is also the author of Reckoning: The Ends of War in Guatemala and coeditor of War by Other Means: Aftermath in Post-Genocide Guatemala, both also published by Duke University Press.
REVIEWS
-- Rebecca Nelson Anthropology Book Forum

Part IV. Yes to Life = NO to Mining