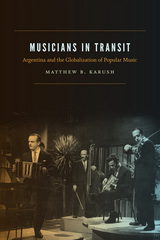 In Musicians in Transit Matthew B. Karush examines the transnational careers of seven of the most influential Argentine musicians of the twentieth century: Afro-Argentine swing guitarist Oscar Alemán, jazz saxophonist Gato Barbieri, composer Lalo Schifrin, tango innovator Astor Piazzolla, balada singer Sandro, folksinger Mercedes Sosa, and rock musician Gustavo Santaolalla. As active participants in the globalized music business, these artists interacted with musicians and audiences in the United States, Europe, and Latin America and contended with genre distinctions, marketing conventions, and ethnic stereotypes. By responding creatively to these constraints, they made innovative music that provided Argentines with new ways of understanding their nation’s place in the world. Eventually, these musicians produced expressions of Latin identity that reverberated beyond Argentina, including a novel form of pop ballad; an anti-imperialist, revolutionary folk genre; and a style of rock built on a pastiche of Latin American and global genres. A website with links to recordings by each musician accompanies the book.
AUTHOR BIOGRAPHY
Matthew B. Karush is Professor of History at George Mason University. He is the author of Culture of Class: Radio and Cinema in the Making of a Divided Argentina, 1920–1946 and coeditor of The New Cultural History of Peronism: Power and Identity in Mid-Twentieth-Century Argentina, both also published by Duke University Press.
REVIEWS
"Thanks to his command of cultural, social, and historical contexts and deftness in illuminating and interpreting the dialectic between musicians and the forces of transnationalism and globalization, [Karush] succeeds in presenting a nuanced, sweeping view of Argentinian music history that also reads as an engaging narrative. . . . Highly recommended."

“... Karush ultimately presents a very interesting interpretation of Argentine popular musicians in a transnational context and offers a compelling depiction of the intricacies and complexities involved in the construction of any national identity.”

"Karush tells a story of artistic individual agency and transnational influences that avoids simplistic conclusions about cultural imperialism and authenticity. . . . This is an ambitious work that successfully explores uncharted territory in Argentine history."

"Expertly crafted. . . . [Musicians in Transit] deserves to be read by anyone interested in the development of Latin American identity in the twentieth century."

“It is impossible to do justice to this complex book in a brief review. Musicians in Transit is an ambitious exploration of globalization, national identity, and ethnicity viewed through the multidimensional lens of these seven musicians….The book will have broad cross-disciplinary appeal and, like its subject, transnational relevance and impact.”

“Musicians in Transit constitutes an excellent addition that will surely establish itself as a reference for the study of twentieth-century Argentine popular music and its relationship with nation-ness.”

"This book commands attention both for its creativeness and daring. . . . This book will be read with profit and enthusiasm not only by popular music specialists and students of Latin American musical culture, but anyone interested in cultural industries broadly conceived."

"A lucid and carefully articulated contribution. . . . The book resonates with recent musicological scholarship that is particularly concerned with the roles that media and mediators play in the articulation of local musical identities in South America. . . . This is a book rich with detail and lucid insight, and is essential reading for scholars of Argentine popular music."

“Musicians in Transit is an important contribution to both the history of Argentine popular music and to the study of the transnational logic of cultural industries, which Karush had brilliantly explored in his previous book on the influence of radio, cinema, and tango on the birth of Peronism.”

1. Black in Buenos Aires: Oscar Alemán and the Transnational History of Swing  15

2. Argentines into Latins: The Jazz Histories of Lalo Schifrin and Gato Barbieri  39

4. The Sound of Latin America: Sandro and the Invention of Balada  108

6. The Music of Globalization: Gustavo Santaollalo and the Production of Rock Latino  179