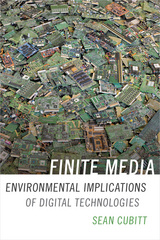 While digital media give us the ability to communicate with and know the world, their use comes at the expense of an immense ecological footprint and environmental degradation. In Finite Media Sean Cubitt offers a large-scale rethinking of theories of mediation by examining the environmental and human toll exacted by mining and the manufacture, use, and disposal of millions of phones, computers, and other devices. The way out is through an eco-political media aesthetics, in which people use media to shift their relationship to the environment and where public goods and spaces are available to all. Cubitt demonstrates this through case studies ranging from the 1906 film The Story of the Kelly Gang to an image of Saturn taken during NASA's Cassini-Huygens mission, suggesting that affective responses to images may generate a populist environmental politics that demands better ways of living and being. Only by reorienting our use of media, Cubitt contends, can we overcome the failures of political elites and the ravages of capital.
AUTHOR BIOGRAPHY
Sean Cubitt is Professor of Film and Television, Goldsmiths, University of London, and the author of several books, most recently, The Practice of Light: A Genealogy of Visual Technologies from Prints to Pixels.
REVIEWS
-- Niall Flynn LSE Review of Books