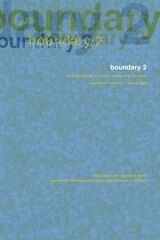 BUY
The Sixties and the World Event, Volume 36
by Christopher Connery and Hortense Spillers
Duke University Press
Paper: 978-0-8223-6704-8
This special issue of boundary 2 revisits the 1960s through a global and multidisciplinary lens. It treats the decade as a global historical event, comprising decolonization, liberation, revolution, and movements against various establishments. Engaging questions of history and temporality, this issue illustrates that continued exploration and consideration of the 1960s around the world are crucial to a critical engagement with the present.

Contributors to this issue represent a wide range of disciplines, from Latin American studies and sociology to political theory and literary criticism. They bring a global perspective to the social and political legacy of the 1960s, touching on the Caribbean, Latin America, the former USSR, China, and France, as well as the United States. One contributor presents a reexamination of Latin American armed struggles in the 1960s that foregrounds the relatively positive influence of these struggles on present-day Latin American society and politics. Another contributor translates a seminal essay on José Martí written by one of Cuba’s foremost intellectuals in the mid-1960s, when the course of the Cuban revolution was still uncertain. Yet another contributor considers the forces that have sought to neutralize the struggles and negate the gains of the African American liberation movement in the 1960s American South.