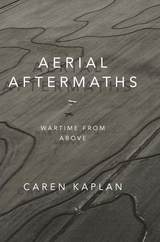 From the first vistas provided by flight in balloons in the eighteenth century to the most recent sensing operations performed by military drones, the history of aerial imagery has marked the transformation of how people perceived their world, better understood their past, and imagined their future. In Aerial Aftermaths Caren Kaplan traces this cultural history, showing how aerial views operate as a form of world-making tied to the times and places of war. Kaplan’s investigation of the aerial arts of war—painting, photography, and digital imaging—range from England's surveys of Scotland following the defeat of the 1746 Jacobite rebellion and early twentieth-century photographic mapping of Iraq to images taken in the immediate aftermath of 9/11. Throughout, Kaplan foregrounds aerial imagery's importance to modern visual culture and its ability to enforce colonial power, demonstrating both the destructive force and the potential for political connection that come with viewing from above.
AUTHOR BIOGRAPHY
Caren Kaplan is Professor of American Studies at the University of California, Davis, and the author and editor of several books including Life in the Age of Drone Warfare, also published by Duke University Press.
REVIEWS
-- Jason Pearl Public Books