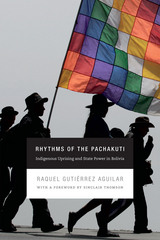 In the indigenous Andean language of Aymara, pachakuti refers to the subversion and transformation of social relations. Between 2000 and 2005, Bolivia was radically transformed by a series of popular indigenous uprisings against the country's neoliberal and antidemocratic policies. In Rhythms of the Pachakuti, Raquel Gutiérrez Aguilar documents these mass collective actions, tracing the internal dynamics of such disruptions to consider how motivation and execution incite political change.

"In Rhythms of the Pachakuti we can sense the reverberations of an extraordinary historical process that took place in Bolivia at the start of the twenty-first century. The book is the product of Raquel Gutiérrez Aguilar's political engagement in that historical process. . . . Though of Mexican nationality, [she] was intimately involved in Bolivian politics for many years and acquired a quasi-legendary status there as an intense, brilliant activist and radical intellectual. . . . [Her account is] . . . itself a revolutionary document. . . . Rhythms of the Pachakuti deserves to stand as a key text in the international literature of radicalism and emancipatory politics in the new century."—Sinclair Thomson, from the foreword
AUTHOR BIOGRAPHY
Raquel Gutierrez Aguilar is Professor of Sociology at the Autonomous University of Puebla.


Foreword: Beyond the Old Order of Things ix

1. The Coalition for the Defense of Water and Life: The Massive Public Defiance of State Order 3

2. Aymara Roadblocks in La Paz: Community as a Mobilizing Force 28

6. The Growing Tension between Emancipation, Autonomy, Self-Governance, and State Reconstitution in 2005 152

Appendix 2: Positions of the Social Voices and Tables 195