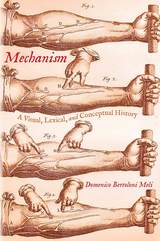 The mechanical philosophy first emerged as a leading player on the intellectual scene in the early modern period—seeking to explain all natural phenomena through the physics of matter and motion—and the term mechanism was coined. Over time, natural phenomena came to be understood through machine analogies and explanations and the very word mechanism, a suggestive and ambiguous expression, took on a host of different meanings. Emphasizing the important role of key ancient and early modern protagonists, from Galen to Robert Boyle, this book offers a historical investigation of the term mechanism from the late Renaissance to the end of the seventeenth century, at a time when it was used rather frequently in complex debates about the nature of the notion of the soul. In this rich and detailed study, Domenico Bertoloni Meli focuses on strategies for discussing the notion of mechanism in historically sensitive ways; the relation between mechanism, visual representation, and anatomy; the usage and meaning of the term in early modern times; and Marcello Malpighi and the problems of fecundation and generation, among the most challenging topics to investigate from a mechanistic standpoint.
AUTHOR BIOGRAPHY
Domenico Bertoloni Meli is provost professor in history and philosophy of science and medicine at Indiana University, Bloomington. He has received several fellowships and awards, including a Wellcome Fellowship at Cambridge University, a Dibner Fellowship at MIT, a membership at the Institute for Advanced Study, Princeton, and a John Simon Guggenheim Fellowship.
TABLE OF CONTENTS
Contents
Acknowledgments
Introduction
Chapter 1: Framing Mechanisms
Chapter 2: Mechanism and Visualization
Chapter 3: “The Very Word Mechanism”
Chapter 4: Mechanisms as Investigative Projects
Concluding Reflections
Notes
Bibliography
Index
REQUEST ACCESSIBLE FILE