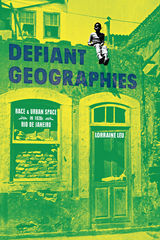 BUY FROM
Defiant Geographies: Race and Urban Space in 1920s Rio de Janeiro
by Lorraine Leu
University of Pittsburgh Press, 2020
Cloth: 978-0-8229-4600-7
eISBN: 978-0-8229-8736-9
Defiant Geographies examines the destruction of a poor community in the center of Rio de Janeiro to make way for Brazil’s first international mega-event. As the country celebrated the centenary of its independence, its postabolition whitening ideology took on material form in the urban development project that staged Latin America’s first World’s Fair. The book explores official efforts to reorganize space that equated modernization with racial progress. It also considers the ways in which black and blackened subjects mobilized their own spatial logics to introduce alternative ways of occupying the city. Leu unpacks how the spaces of the urban poor are racialized, and the impact of this process for those who do not fit the ideal models of urbanity that come to define the national project. Defiant Geographies puts the mutual production of race and space at the heart of scholarship on Brazil’s urban development and understands urban reform as a monumental act of forgetting the country’s racial past.
AUTHOR BIOGRAPHY
Lorraine Leu is associate professor at the University of Texas, Austin, where she holds a joint appointment in the Lozano Long Institute for Latin American Studies (LLILAS) and the Department of Spanish and Portuguese. She is the author of Brazilian Popular Music, and coedited the anthology Latin American Cultural Studies: A Reader.
TABLE OF CONTENTS
Contents
Acknowledgments
Introduction
1. Race, Ethnicity, and Urbanization
2. Race, Ethnicity, and Visuality
3. Alternative Geographies and Spatial Practices
4. Eradicating Blackness from the Ideal City
Epilogue: Mega-events, Ruination, and the Politics of Staying Put
Notes
Bibliography
Index
REQUEST ACCESSIBLE FILE