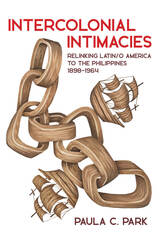 As a nation, the Philippines has a colonial history with both Spain and the United States. Its links to the Americas are longstanding and complex. Intercolonial Intimacies interrogates the legacy of the Spanish Empire and the cultural hegemony of the United States by analyzing the work of twentieth-century Filipino and Latin/o American writers and diplomats who often read one other and imagined themselves as kin. The relationships between the Philippines and the former colonies of the Spanish Empire in the Americas were strengthened throughout the twentieth century by the consolidation of a discourse of shared, even familiar, identity. This distinct inherited intercolonial bond was already disengaged from their former colonizer and further used to defy new forms of colonialism. By examining the parallels and points of contact between these Filipino and Latin American writers, Paula C. Park elaborates on the “intercolonial intimacies” that shape a transpacific understanding of coloniality and latinidad.

REVIEWS
“Park’s fascinating study makes a major contribution to the emerging field of transpacific studies by adding the often-neglected Pacific Latin American region in its anti-imperialist dialog with the Philippines. Avoiding romanticization, she offers a genealogy of how, from 1898 to 1964, both Filipino and Latin American intellectuals addressed, through appropriated discourses of Latinidad and Hispanidad, transpacific links among former Spanish colonies in order to collectively resist US imperialism.” —Ignacio López-Calvo, University of California, Merced


“No other scholarly work situates the contending discourses of Latin American modernismo, Hispanismo, and the (Anglo) Sajonismo of US colonial policies of ‘benevolent assimilation’ in Philippine literature and politics, as comprehensively and eruditely as Park’s Intercolonial Intimacies. Drawing on colonial history and literature, Latin American cultural theory, (US) empire studies, and the multiple legacies of world-systems theory, Park reawakens the forgotten ties between writers and intellectuals speaking across both oceans and prepares us to grasp at once the Latin(x) contribution to transpacific studies and the Philippine contribution to Hispanophone literature.” —John D. Blanco, University of California, San Diego

TABLE OF CONTENTS
Contents
Acknowledgments
A Note on Language
Introduction. Residual Intercolonial Intimacies across the “Hispanic” Pacific
Chapter 1. 1898, Modernismo, and the Detours of the “Latin Race”
Chapter 2. The Transpacific Reach of US Latinidad
Chapter 3. On the Globality of Mexico and the Manila Galleon
Chapter 4. Redefining Hispanidad and the Colonial Past from an Intercolonial Perspective
Conclusion. Reimagining (Third) World Literature between Latin America and the Philippines
Notes
Bibliography
Index
REQUEST ACCESSIBLE FILE