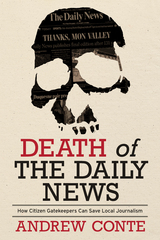 The City of McKeesport in southwestern Pennsylvania once had a population of more than fifty thousand people and a newspaper that dated back to the nineteenth century. Technology has caused massive disruption to American journalism, throwing thousands of reporters out of work, closing newsrooms, and leaving vast areas with few traditional news sources—including McKeesport. With the loss of their local paper in 2015, residents now struggle to make sense of what goes on in their community and to separate facts from gossip—often driven by social media. The changes taking place in this one Pennsylvania community are being repeated across the United States as hundreds of local newspapers close, creating news deserts and leaving citizens with little access to reliable local journalism. The obituary for local news, however, does not have to read all bad: Even in the bleakest places, citizens are discovering what happens in their communities and becoming gatekeepers to information for the people around them. In McKeesport, citizens are attempting to make sense of the news on their own, for better and worse. This experiment not only offers clues about what happens after a local newspaper dies, but also provides guidance to the way forward.

Andrew Conte founded the Center for Media Innovation at Point Park University in Pittsburgh, which serves as a laboratory for the present and future of local journalism. He previously worked as an investigative journalist, and he has authored several nonfiction books.

REVIEWS
“Death of the Daily News is a rich, fascinating, and necessary anatomy of what a town goes through in the years after its newspaper dies, how it looks at what was lost, and how some people are trying to build a new kind of local journalism.” —Daily Yonder