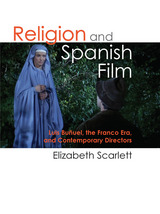 Treatments of religion found in Spanish cinema range from the pious to the anticlerical and atheistic, and every position in between. In a nation with a strong Catholic tradition, resistance to and rebellion against religious norms go back almost as far as the notion of “Sacred Spain.” Religion and Spanish Film provides a sustained study of the religious film genre in Spain practiced by mainstream Francoist film makers, the evolving iconoclasm, parody, and reinvention of the Catholic by internationally renowned Surrealist Luis Buñuel, and the ongoing battle of the secular versus the religious manifested in critically and popularly acclaimed directors Pedro Almodóvar, Julio Medem, Alejandro Amenábar, and many others. The conflicted Catholicism that emerges from examining religious themes in Spanish film history shows no sign of ending, as unresolved issues from the Civil War and Franco dictatorship, as well as the unsettled relationship between Church and State, continue into the present.
AUTHOR BIOGRAPHY
Elizabeth Scarlett is Professor in the Department of Romance Languages and Literature at the University of Buffalo, SUNY.
TABLE OF CONTENTS
Contents
Introduction: God and the Spanish Director
One. Luis Buñuel and the Reinvention of Catholicism
Looking Back in Anger: Iconoclastic and Anticlerical Roots
Catholicism Reinvented in Later Films
Two. The Religious Genre Film and Its Discontents in Francoist Spain
History of the Christian Religious Genre Film
Preaching to the Converted: Missionaries and Apparitions of Mary
Lives of the Saints as Measures of Holiness and Citizenship
New Genres and New Wave Directors of the Sixties and Seventies
Three. Breaking Boundaries: Post-Franco and Contemporary Directors
Variations on a Theme of National Identity: Reclaiming St. Teresa
Pedro Almodóvar and the Gathering Storm
Postmodern Skepticism versus the Need to Believe
Conclusion: Religion and the Spanish Habitus
Notes
Filmography of Films Discussed in Detail
Works Cited
Index of Film Titles, Theorists, and Directors
REQUEST ACCESSIBLE FILE