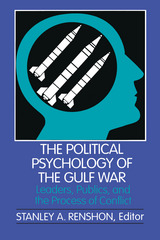 In these original essays, widely respected experts analyze the personal psychologies and public belief systems of the individuals and nations involved in the Gulf War - from George Bush and Saddam Hussein to the peoples of the United States, Israel, and Arab countries.  Approaching the events of 1990-1991 from the perspectives of psychology, history, mass communications, and political science, these scholars examine the dynamic relationship of events, behavior, and perceptions.

Part I deals with the psychological and political origins of the war; part II focuses on George Bush, Saddam Hussein, and the nature of their leadership and judgement; part III discusses the battle for public perceptions and beliefs waged by both sides; part IV analyzes the results of that battle as revealed by the understanding of the U.S., Israeli, and Arab publics; and part V deals with the war’s consequences.  A postscript by Stanley Renshon covers military actions in the Gulf in late 1992 and early 1993.

"Provides many stimulating ideas on the role of psychological factors in a dramatic international conflict." --Journal of Peace Research