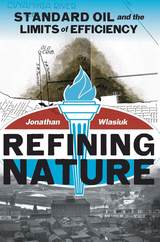 The Standard Oil Company emerged out of obscurity in the 1860s to capture 90 percent of the petroleum refining industry in the United States during the Gilded Age. John D. Rockefeller, the company’s founder, organized the company around an almost religious dedication to principles of efficiency. Economic success masked the dark side of efficiency as Standard Oil dumped oil waste into public waterways, filled the urban atmosphere with acrid smoke, and created a consumer safety crisis by selling kerosene below congressional standards.

Local governments, guided by a desire to favor the interests of business, deployed elaborate engineering solutions to tackle petroleum pollution at taxpayer expense rather than heed public calls to abate waste streams at their source. Only when refinery pollutants threatened the health of the Great Lakes in the twentieth century did the federal government respond to a nascent environmental movement. Organized around the four classical elements at the core of Standard Oil’s success (earth, air, fire, and water), Refining Nature provides an ecological context for the rise of one of the most important corporations in American history.
AUTHOR BIOGRAPHY
Jonathan Wlasiuk is visiting assistant professor of practice at Lyman Briggs College, Michigan State University.
TABLE OF CONTENTS
Contents
Acknowledgments
Introduction
One. Improved Earth
Two. Fire
Three. Water
Four. Air
Five. Efficient Earth
Conclusion: A River Burns Through It
Notes
Bibliography
Index
REQUEST ACCESSIBLE FILE