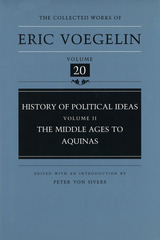 Voegelin's magisterial account of medieval political thought opens with a survey of the structure of the period and continues with an analysis of the Germanic invasions, the fall of Rome, and the rise of empire and monastic Christianity. The political implications of Christianity and philosophy in the period are elaborated in chapters devoted to John of Salisbury, Joachim of Flora (Fiore), Frederick II, Siger de Brabant, Francis of Assisi, Roman law, and climaxing in a remarkable study of Saint Thomas Aquinas's mighty thirteenth-century synthesis.

Although History of Political Ideas was begun as a textbook for Macmillan, Voegelin never intended it to be a conventional chronological account. He sought instead an original comprehensive interpretation, founded on primary materials and taking into account the most advanced specialist scholarship—or science as he called it—available to him. Because of this, the book grew well beyond the confines of an easily marketable college survey and until now remained unpublished.

In the process of writing it, Voegelin himself outgrew the conceptual frame of a "History of Political Ideas," turning to compose Order and History and the other works of his maturity. History of Political Ideas became the ordered collection of materials from which much of Voegelin's later theoretical elaboration grew, structured in a manner that reveals the conceptual intimations of his later thought. As such, it provides an unparalleled opportunity to observe the working methods and the intellectual evolution of one of our century's leading political thinkers. In its embracing scope, History of Political Ideas contains both analyses of themes Voegelin developed in his later works and discussions of authors and ideas to which he did not return or which he later approached from a different angle and with a different emphasis.

The Middle Ages to Aquinas has withstood the test of time. What makes it still highly valuable is its thoroughly revisionist approach, cutting through all the convenient clichés and generalizations and seeking to establish the experiential underpinnings that typified the medieval period.

Peter von Sivers is Associate Professor of Middle Eastern history at the University of Utah in Salt Lake City.