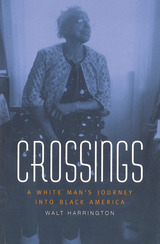 One day in the dentist's office journalist Walt Harrington heard a casual racist joke that left him enraged. Married to a black woman, Harrington is the father of two biracial children. His experience in the dentist's office made him realize not only that the joke was about his own children but also that he really knew very little about what it was like to be a black person in America.

After this rude awakening, Harrington set off on a twenty- five-thousand-mile journey through black America, talking with scores of black and white people along the way, including an old sharecropper, a city police chief, a jazz trumpeter, a convicted murderer, a welfare mother, and a corporate mogul. In Crossings, winner of the Gustavus Myers Award for the Study of Human Rights, he relates what he learned as he listened.

An award-winning journalist and former staff writer for the Washington Post Magazine,Walt Harrington is currently Professor of Journalism at the University of Illinois at Urbana-Champaign. He is the author of At the Heart of It: Ordinary People, Extraordinary Lives and American Profiles: Somebodies and Nobodies Who Matter (both from the University of Missouri Press).