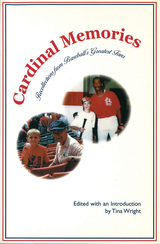 Heralded by local and national media as perhaps baseball's most devoted followers, the lovers of St. Louis's legendary Redbirds have a special bond with their team. Cardinal Memories: Recollections from Baseball's Greatest Fans celebrates this relationship by focusing on the people in the stands. A collection of essays gathered from around the world, from St. Louis to Hong Kong, Cardinal Memories forms a history of the team the way it is best remembered—through the eyes and hearts of its fans.

By turns funny and poignant, these stories chronicle Cardinal teams and players from the Gashouse Gang to the Swifties, from El Birdos to Whiteyball and Big Mac. The bond between parent and child, the generosity of numerous players, and the power of a single game to unite thousands of people are only a few of the themes that run throughout this remarkable collection. Whether it's the tale of young fans clamoring at a bus stop for a glimpse of Stan the Man, a surprise gift from the "Mad Hungarian," or Mark McGwire's "71st" home run, these vignettes capture the joy, heartbreak, and passion of being a Cardinal fan.

Focusing on the game's emotional appeal, Cardinal Memories is about more than baseball—its evocative tales capture the game's deeper meanings and offer readers an affectionate slice of Americana. Transcending Cardinal country, these touching stories will appeal to baseball fans and sports enthusiasts everywhere.

A Missouri native and Cardinal fan since her teens, Tina Wright is a publicist in the country music industry in Nashville. Although she now lives in the South, she still spends her winters in front of the "Hot Stove" and counts the days until spring.

"The Cardinals have one of the richest histories in all of baseball. They have a special place in the imaginations of generations of fans in the large slice of America that is Cardinal Country. The stories here speak to the passion and connection that Redbird rooters feel for their team."—Bob Costas


Wow! You guys really love your baseball here, don't you?" Only a non-Cardinal fan could make such a statement.