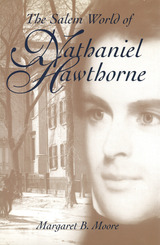 Although most writers on Nathaniel Hawthorne touch on the importance of Salem, Massachusetts, to his life and career, no detailed study has been published on the powerful heritage bequeathed to him by his ancestors and present to him during his years in that town. In The Salem World of Nathaniel Hawthorne, Margaret B. Moore thoroughly investigates Hawthorne's family, his education before college (about which almost nothing has been known), and Salem's religious and political influences on him. She details what Salem had to offer Hawthorne in the way of entertainment and stimulation, discusses his friends and acquaintances, and examines the significant role of women in his life—particularly Mary Crowninshield Silsbee and Sophia Peabody.

Nathaniel Hawthorne felt a strong attachment to Salem. No matter what he wrote about the town, it was the locale for many of his stories, sketches, a novel, and a fragmentary novel. Salem history haunted him, and Salem people fascinated him. And Salem seems to have a perennial fascination for readers, not just for Hawthorne scholars. New information from primary sources, including letters (many unpublished), diaries, and contemporary newspapers, adds much not previously known about Salem in the early nineteenth century. Moore has found new sources in various manuscript collections, such as the privately owned Felt-White Collection and the Richards and Ashburner Papers in the National Library in Scotland. She also uses extensively the many manuscript collections at the Peabody Essex Museum.

By tracing the effect of Salem on Hawthorne's writing, The Salem World of Nathaniel Hawthorne makes clear that Hawthorne not only was aware of his "own dear native place" but also drew upon it consciously and subconsciously in his work. This book contributes to a better understanding of Hawthorne as man and writer and of Salem's vital part in his life and work.

Margaret B. Moore is an independent scholar. She has published widely on Hawthorne and is the former secretary of the Nathaniel Hawthorne Society. Moore lives in Athens, Georgia.