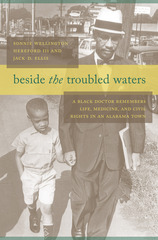 Beside the Troubled Waters is a memoir by an African American physician in Alabama whose story in many ways typifies the lives and careers of black doctors in the south during the segregationist era while also illustrating the diversity of the black experience in the medical profession. Based on interviews conducted with Hereford over ten years, the account includes his childhood and youth as the son of a black sharecropper and Primitive Baptist minister in Madison County, Alabama, during the Depression; his education at Huntsville’s all-black CouncillSchool and medical training at MeharryMedicalCollege in Nashville; his medical practice in Huntsville’s black community beginning in 1956; his efforts to overcome the racism he met in the white medical community; his participation in the civil rights movement in Huntsville; and his later problems with the Medicaid program and state medical authorities, which eventually led to the loss of his license.

Hereford’s memoir stands out because of its medical and civil rights themes, and also because of its compelling account of the professional ruin Hereford encountered after 37 years of practice, as the end of segregation and the federal role in medical care placed black doctors in competition with white ones for the first time.
AUTHOR BIOGRAPHY
Sonnie Wellington Hereford III is a retired physician and civil rights leader who has taught at AlabamaA&MUniversity and CalhounCommunity College, and has served as campus physician for those schools, as well as Oakwood College.
Jack D. Ellis is Professor Emeritus of History at the University of Alabama in Huntsville and author of The Physician-Legislators of France: Medicine and Politics in the EarlyThirdRepublic, 1870–1914.
TABLE OF CONTENTS
Contents
Acknowledgments
Introduction
Map
1. Through a Glass Darkly
2. To Be a Doctor
3. Medical Practice under Segregation
4. Bringing Freedom to the Rocket City
5. Integrating the Hospital and the Schools
6. Troubles and Trials
Afterword
Notes
Bibliography
Index