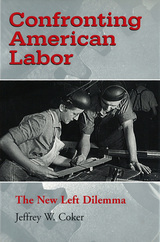 Confronting American Labor traces the development of the American left, from the Depression era through the Cold War, by examining four representative intellectuals who grappled with the difficult question of labor’s role in society. Since the time of Marx, leftists have raised over and over the question of how an intelligentsia might participate in a movement carried out by the working class. Their modus operandi was to champion those who suffered injustice at the hands of the powerful. From the late nineteenth through much of the twentieth century, this meant a focus on the industrial worker.
The Great Depression was a time of remarkable consensus among leftist intellectuals, who often interpreted worker militancy as the harbinger of impending radical change. While most Americans waited out the crisis, listening to the assurances of President Franklin D. Roosevelt, the Marxian left was convinced that the crisis was systemic. Intellectuals who came of age during the Depression developed the view that the labor movement in America was to be the organizing base for a proletariat. Moreover, many came from working-class backgrounds that contributed to their support of labor.
World War II and the resultant economic recovery shattered this coherence on the left. How did radicals opposed to capitalism deal with a labor movement that was very successful in terms of membership and power but clearly capitalist in its orientation? Coker describes the marked ambivalence and confusion of the intellectual left in the postwar years—a period of frustration brought on by a misreading of labor militancy during the 1930s and an unsuccessful search for a radical proletarian movement. The result was a politically and intellectually weakened left for decades to come.
Confronting American Labor examines four individuals who represent a cross section of postwar radicalism. Each came of age on the socialist left, expecting that an anticapitalist movement would emerge from the ranks of labor. Seymour Martin Lipset and C. Wright Mills were professional sociologists. Sidney Lens spent his early life working within the labor movement before becoming a political commentator for a variety of leftist magazines and journals in the postwar era. Historian Herbert Gutman helped to create a “new labor history” that reflected broader transformations within the intellectual left. In tracing their various approaches to the problem of labor, Confronting American Labor explores the diverse nature of the postwar left. This important work will be of value to anyone interested in labor, class, and American thought.
AUTHOR BIOGRAPHY
Jeffrey W. Coker is Assistant Professor of History at Belmont University in Nashville, Tennessee.
TABLE OF CONTENTS