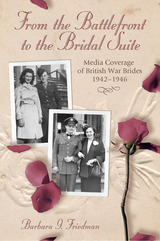 With their gregarious natures and casual styles, American GIs in wartime England were instantly attractive to British women—especially in the absence of their fighting men. As a result, some seventy thousand British war brides returned to the United States—with many on the home front at first suspecting that the GIs were somehow being exploited.

The war brides’ stories have been told in memoirs, romantic novels, and immigration history. Barbara Friedman sheds new light on their experiences by focusing on media representations of sexuality and marriage in wartime, showing how mass media interpretations turned from public suspicion of war brides to popular acceptance.

Friedman tells how British media first insisted that GIs had come to fight, not to woo the locals, and shrugged off the first brides as an “American problem.” Yet, as Friedman shows, the British media were complicit in encouraging the relationships in the first place: the British press promoted a hospitality program that deemed the entertainment of American troops “patriotic duty,” while women’s magazines hailed American men as ideal husbands and the United States as a promised land.

From the American perspective, Friedman reveals, despite rules against foreign marriages, the U.S. Army encouraged GI-civilian fraternization through armed service publications, attitudes toward GI sexuality, and participation in the hospitality program. Armed service publications went from depicting British women as “frowsy dames” to honoring them as models of domesticity, while newspapers back home eventually legitimized the marriages by casting the brides as welcome additions to American society. Meanwhile, American women’s magazines viewed them as more similar to than different from their American counterparts and called on readers to help British brides master American homemaking.

By combining letters and diaries of brides with published accounts, Friedman identifies accuracies and inaccuracies in the media record as well as gaps in coverage. She considers how the brides saw themselves compared to their media images and shows how the media co-opted brides as symbols of the Anglo-American “special friendship,” postwar power imbalance, and gendered ideals of marriage and domestication.

From the Battlefront to the Bridal Suite is the untold story of overlooked participants in the most celebrated drama of the twentieth century—women whose lives were shaped profoundly by a war that was more than just a male enterprise. It shows the power of the press in the most unlikely matters and suggests a broader definition of the wartime experience.

AUTHOR BIOGRAPHY
Barbara G. Friedman is Assistant Professor of Journalism and Mass Communication at the University of North Carolina at Chapel Hill. She lives in Hillsborough, North Carolina.
TABLE OF CONTENTS