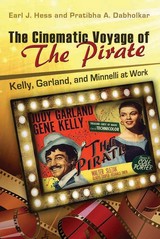 During Metro-Goldwyn-Mayer’s glory days, the studio’s famous Arthur Freed Unit made an extraordinary string of dazzling musicals. One of its very best was The Pirate. Based on a successful 1942 Broadway production, the film was directed by Vincente Minnelli and starred Gene Kelly and Judy Garland. It showcased some of the brightest work of these three gifted moviemakers and entranced many critics and viewers with exotic set décor and costumes, brilliant Technicolor application, stunning dance routines, and a clever plot about an actor who pretends to be a famous pirate to win the love of a fanciful island girl.

The Cinematic Voyage of The Pirate: Kelly, Garland, and Minnelli at Work follows the model of Hess and Dabholkar’s previous study of Singin’ in the Rain. Drawing on exhaustive research in archives, memoirs, interviews, and newspaper coverage, it takes the reader from the original conception of the story in the mind of a German playwright named Ludwig Fulda, through S. N. Behrman’s Broadway production starring Alfred Lunt and Lynn Fontanne, to the arduous task of crafting a suitable screenplay at MGM. Behind-the-scenes issues such as Garland’s personal problems during the making of the film and the shaping of the film by Minnelli and Kelly are among the many subjects detailed here.
While the initial reception of The Pirate reinforced hopes for its success, many audiences did not understand the film’s tongue-in-cheek aspect, and some critical reviews were mixed. This shaded the perception of the film and its significance. As this careful study shows, The Pirate was a commercial and critical success despite some early misperceptions. The movie made a small profit for MGM, and the film grew in public appeal over time.

The Pirate has been studied by film historians, gender studies scholars, and film studies professionals since it was released in 1948. The Cinematic Voyage of The Pirate contributes to a growing literature asserting the importance of single-film production history and the significance of the film musical in the golden age of Hollywood.

AUTHOR BIOGRAPHY
Earl J. Hess is Stewart W. McClelland Chair in History at Lincoln Memorial University. Pratibha A. Dabholkar is Retired Associate Professor of Business from the University of Tennessee. The authors are married to each other and live in the southeastern U.S. Although Dr. Hess’s principal area of research is the Civil War and Dr. Dabholkar’s is technology in services, both are connoisseurs of the film musical, applying their rigorous academic approach to research and write full histories of classic musicals. Their first book on the comprehensive history of a film musical is Singin’ in the Rain: The Making of an American Masterpiece. More information about the authors and their work can be found at www.love-and-learning.info.
TABLE OF CONTENTS
Contents
List of Illustrations
Preface
Acknowledgments
1. The Pirate on Stage
2. Creating the Perfect Screenplay
3. Major Players and Preproduction
4. Filming Challenges
5. Postproduction and Reactions to the Film
6. Legacy of The Pirate
Appendix A. Discarded Screenplays for The Pirate
Appendix B. Behrman’s Lines in the Goodrich-Hackett Screenplay and the Film
Appendix C. Cast and Crew List with Mini-Biographies
Notes
Bibliography
Index
REQUEST ACCESSIBLE FILE