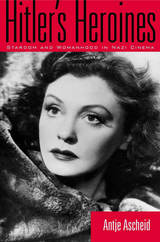 German film-goers flocked to see musicals and melodramas during the Nazi era. Although the Nazis seemed to require that every aspect of ordinary life advance the fascist project, even the most popular films depicted characters and desires that deviated from the politically correct ideal. Probing into the contradictory images of womanhood that surfaced in these films, Antje Ascheid shows how Nazi heroines negotiated the gender conflicts that confronted contemporary women.The careers of Kristina Soderbaum, Lilian Harvey, and Zarah Leander speak to the Nazis' need to address and contain the "woman question," to redirect female subjectivity and desires to self sacrifice for the common good (i.e., national socialism). Hollywood's new women and glamorous dames were out; the German wife and mother were in. The roles and star personas assigned to these actresses, though intended to entertain the public in a politically conformist way, point to the difficulty of yoking popular culture to ideology.
AUTHOR BIOGRAPHY
Antje Ascheid is Assistant Professor in the Department of Drama and Theater at the University of Georgia.
REVIEWS
"Hitler's Heroines is the first in-depth study of the complex role of female stars in Nazi cinema. Ascheid's detailed analysis of three of the most celebrated stars—Kristina Söderbaum, Zarah Leander, and Lilian Harvey—shows the crucial role female stars played within Joseph Goebbels's entertainment industry. Ascheid highlights womanhood as a central area of contestation within German fascism and her work is informed by a wealth of recent critical studies on the history and cinema of the Third Reich."—Gerd Gemünden, Professor of German and Comparative Literature, Dartmouth College


"Hitler's Heroines undermines the notion of the Nazi state's total control of public attitudes. It reveals the slippages in the discourses on gender, sexuality and nation that occurred through the film industry's construction of female stardom. In the process, the book breaks new ground in the increasingly well-cultivated terrain of Nazi cinema studies."—Robert R. Shandley, Associate Professor of Film Studies and German, Texas A&M University, and author of Rubble Films: German Cinema in the Shadow of the Third Reich (Temple)


"[A] useful and stimulating study...Ascheid's book, well-researched, tightly structured, and—for the most part—well written, is a highly welcome addition to the growing body of sophisticated studies of the cinema of the Third Reich."—German Studies Review