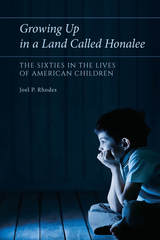 This study examines how the multiple social, cultural, and political changes between John Kennedy’s inauguration in 1961 and the end of American involvement in Vietnam in 1973 manifested themselves in the lives of preadolescent American children.

Because the preadolescent years are, according to the child development researchers, the most formative, Joel P. Rhodes focuses on the cohort born between 1956 and 1970 who have never been quantitatively defined as a generation, but whose preadolescent world was nonetheless quite distinct from that of the “baby boomers.” Rhodes examines how this group understood the historical forces of the 1960s as children, and how they made meaning of these forces based on their developmental age. He is concerned not only with the immediate imprint of the 1960s on their young lives, but with how their perspective on the era influenced them as adults.
AUTHOR BIOGRAPHY
Joel P. Rhodes is a professor in the History Department of Southeast Missouri State University. He is the author of several books including The Voice of Violence: Performative Violence as Protest in the Vietnam Era and lives in Cape Girardeau, MO.
TABLE OF CONTENTS


Preface
Chapter 1: Wondrous Years
Chapter 2: You Will Be the First President I Will Remember, John F. Kennedy
Chapter 3: Up, Up, and Away: Space Rockets and Cuban Missiles
Chapter 4: Until This Day, I’m Still Looking For Another JFK
Chapter 5: This Great Society Brought to You By the Letters L. B. and J.
Chapter 6: The Southern Struggle for Freedom
Chapter 7: Vietnam Will Really Get Us
Chapter 8: Turned On
Chapter 9: Barbie Did Everything, She Was Superwoman Just Like My Mom
Chapter 10: Conclusions
Selected Bibliography