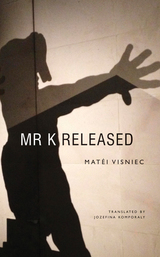 Mr. K Released
by Matéi Visniec
translated by Jozefina Komporaly
Seagull Books, 2019
eISBN: 978-0-85742-676-5
Cloth: 978-0-85742-648-2
Mirroring Romania’s drastic transition from totalitarianism to Western-style freedom in the late 1980s, Mr. K Released captures the disturbingly surreal feeling that many newly liberated prisoners face when they leave captivity. Employing his trademark playful absurdity, Matéi Visniec introduces us to Mr. K, a Kafkaesque figure who has been imprisoned for years for an undisclosed crime in a penitentiary with mysterious tunnels.

One day, Mr. K finds himself unexpectedly released. Unable to comprehend his sudden liberation, he becomes traumatized by the realities of freedom—more so than the familiar trauma of captivity or imprisonment. In the hope of obtaining some clarification, Mr. K keeps waiting for an appointment with the prison governor, however, their meeting is constantly being delayed. During this endless process of waiting, Mr. K gets caught up in a clinical exploration of his physical surroundings. He does not have the courage or indeed inclination to leave, but can move unrestricted within the prison compound, charting endless series of absurd circles in which readers might paradoxically recognize themselves.
AUTHOR BIOGRAPHY
Matéi Visniec is an award-winning Romanian-French playwright, poet, novelist, and journalist. Jozefina Komporaly is a London-based translator and academic. She is the editor and cotranslator of the critical anthologies Matéi Visniec and András Visky’s Barrack Dramaturgy.
REVIEWS
"Mr. K Released is a delightfully absurd, surreal novel about the disorienting qualities of freedom. . . . an engrossing novel of ideas that is entertaining and challenging in its strangeness."
— Foreword Reviews