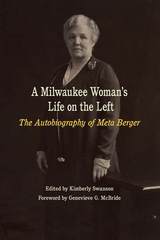 A Milwaukee Woman's Life on the Left: The Autobiography of Meta Berger
by Meta Berger
edited by Kimberly Swanson
foreword by Genevieve C. McBride

Wife, mother, schoolteacher, and politician, Meta Schlichting Berger became an activist at a time when women's role in public life -- indeed, evne their right to vote -- was hotly contested. Telling her story in her own words, Meta Berger reveals her transformation from a traditional wife and mother to an activist who held elective office for thirty years.
REVIEWS