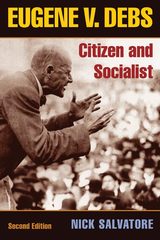 Eugene Debs (1855-1926) is regarded by many as American history's premier labor advocate. He was the leader of the Socialist party, five-time Socialist candidate for president, outspoken on the rights of all workers, and a persistent defender of America's democratic traditions.

Nick Salvatore's acclaimed biography offers a major reevaluation of Debs, the movements he launched, and his belief in American Socialism as an extension of the nation's democratic traditions. He also shows the relationship between Debs's public image and his private life as child, sibling, husband, and lover. Salvatore's Debs--weaknesses intact--emerges as a complex man, frustrated and angered by the glaring inequities of a new economic order, and willing to risk his freedom to preserve the essence of democratic society.

AUTHOR BIOGRAPHY
Nick Salvatore is Maurice and Hinda Neufeld Founders Professor of Industrial and Labor Relations and a professor of American studies at Cornell University. He is the author of We All Got History: The Memory Books of Amos Webberand other books.
REVIEWS
Winner of the Bancroft Prize and the American Historical Association’s John H. Dunning Prize in U.S. History.
— Columbia University Libraries