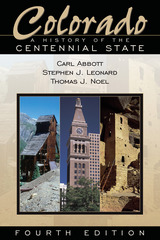 Since 1976 newcomers and natives alike have learned about the rich history of the magnificent place they call home from Colorado: A History of the Centennial State. In this revised edition, co-authors Carl Abbott, Stephen J. Leonard, and Thomas J. Noel incorporate more than a decade of new events, findings, and insights about Colorado in an accessible volume that general readers and students will enjoy.

The new edition tells of conflicts, new alliances, and changing ways of life as Hispanic, European, and African American settlers flooded into a region that was already home to Native Americans. Providing balanced coverage of the entire state's history - from Grand Junction to Lamar and from Trinidad to Craig - the authors also reveal how Denver and its surrounding communities developed and gained influence.

While continuing to elucidate the significant impact of mining, agriculture, manufacturing, and tourism on Colorado, this new edition broadens its coverage. The authors expand their discussion of the twentieth century with several new chapters on the economy, politics, and cultural conflicts of recent years. In addition, they address changes in attitudes toward the natural environment as well as the contributions of women, Hispanics, African Americans, and Asian Americans to the state. Dozens of new illustrations, updated statistics, and an extensive bibliography of the most recent research on Colorado history enhance this edition.

AUTHOR BIOGRAPHY
Thomas J. Noel, also known as "Dr. Colorado", teaches history at the University of Colorado at Denver where he is the director of Public History, Preservation & Colorado Studies, and is a columnist for the Denver Post. He has served as a Denver Landmark Commissioner and chair during the 1970s and 1980s and is a National Register Reviewer for Colorado. He is the author or coauthor of forty-one books on Colorado. Carl Abbott is professor of urban studies and planning at Portland State University. Stephen J. Leonard is professor and chair of the Department of History at Metropolitan State University of Denver.
TABLE OF CONTENTS