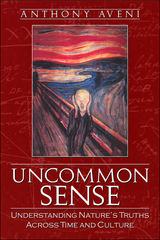 Uncommon Sense: Understanding Nature's Truths Across Time and Culture
by Anthony Aveni
University Press of Colorado, 2006
Cloth: 978-0-87081-828-8
The divide between teaching “intelligent design” and evolution in U.S. schools has brought to the public eye a struggle that archaeoastronomer Anthony Aveni argues is as old as culture itself. All societies seek to understand the natural world, but their search is shaped by culturally distinct views and experiences. In Uncommon Sense, Aveni explores the common and conflicting ways that ancient and contemporary societies have searched for the literal truth about the natural world’s mysteries, from dinosaur bones to the Star of Bethlehem. Aveni demonstrates that a society’s approach to making sense of the natural world can serve as a working definition of its culture, so strongly does it resonate with fundamental values and assumptions.

In ten fascinating essays, Aveni examines topics that have absorbed scientists, religious figures, and ordinary citizens over the centuries. He traces the tug of war between astronomy and astrology, reveals the underpinnings of our notions of cartography and the representation of space and time, and much more.

Readers interested in science, history, and world cultures will revel in this celebration of different cultures’ common and uncommon questions and conclusions about the natural world.

AUTHOR BIOGRAPHY
Anthony Aveni is the Russell Colgate Distinguished University Professor of Astronomy, Anthropolgy, and Native Amerifan Studies at Colgate University. He has researched and written about Maya Astronomy for more than four decades. He was named a U.S. National Professor of the year and has been awarded the H.B. Nicholson Medal for Excellence in Research in Mesoamerican Studies by Harvard's Peabody Museum.
TABLE OF CONTENTS