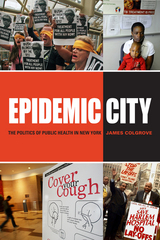 An insightful chronicle of the changing public health demands in New York City. The first permanent Board of Health in the United States was created in response to a cholera outbreak in New York City in 1866. By the mid-twentieth century, thanks to landmark achievements in vaccinations, medical data collection, and community health, the NYC Department of Health had become the nation's gold standard for public health. However, as the city's population grew in number and diversity, the department struggled to balance its efforts between the treatment of diseases—such as AIDS, tuberculosis, and West Nile Virus—and the prevention of illness-causing factors like lead paint, heroin addiction, homelessness, smoking, and unhealthy foods. In Epidemic City, historian of public health James Colgrove chronicles the challenges faced by the health department since New York City's mid-twentieth-century "peak" in public health provision. This insightful volume draws on archival research and oral histories to examine how the provision of public health has adapted to the competing demands of diverse public needs, public perceptions, and political pressure. Epidemic City analyzes the perspectives and efforts of the people responsible for the city's public health from the 1960s to the present—a time that brought new challenges, such as budget and staffing shortages, and new threats like bioterrorism. Faced with controversies such as needle exchange programs and AIDS reporting, the health department struggled to maintain a delicate balance between its primary focus on illness prevention and the need to ensure public and political support for its activities. In the past decade, after the 9/11 attacks and bioterrorism scares partially diverted public health efforts from illness prevention to threat response, Mayor Michael Bloomberg and Health Commissioner Thomas Frieden were still able to pass New York's Clean Indoor Air Act restricting smoking and significant regulations on trans-fats used by restaurants. This legislation—preventative in nature much like the department's original sanitary code—reflects a return to the nineteenth century roots of public health, when public health measures were often overtly paternalistic. The assertive laws conceived by Frieden and executed by Bloomberg demonstrate how far the mandate of public health can extend when backed by committed government officials. Epidemic City provides a compelling historical analysis of the individuals and groups tasked with negotiating the fine line between public health and political considerations. By examining the department's successes and failures during the ambitious social programs of the 1960s, the fiscal crisis of the 1970s, the struggles with poverty and homelessness in the 1980s and 1990s, and in the post-9/11 era, Epidemic City shows how the NYC Department of Health has defined the role and scope of public health services for the entire nation.
AUTHOR BIOGRAPHY
JAMES COLGROVE is associate professor in the Center for the History and Ethics of Public Health at Columbia University's Mailman School of Public Health.
TABLE OF CONTENTS
Contents
Acknowledgments
About the Author
Introduction: Public Health and the American City
1. To Provide or Protect
2. Public Health and the People
3. Dropping Dead
4. A Plague of Politics
5. City of Misfortune
6. Chronicle of an Epidemic Foretold
7. Threat Levels
8. A New Public Health Agenda
Conclusion: The Politics of Public Health
Notes
References
Index