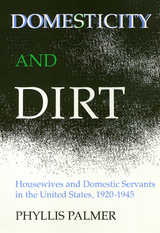 In the era after Suffrage, white middle-class housewives abandoned moves toward paid work for themselves, embraced domestic life, and felt entitled to servants. In Domesticity and Dirt, Phyllis Palmer examines the cultural norms that led such women to take on the ornamental and emotional elements of the job while relegating the hard physical work and demeaning service tasks to servants—mainly women of color. Using novels, films, magazine articles, home economics texts, and government-funded domestic training course manuals, the author details cultural expectations about middle-class homelife.

Palmer describes how government-funded education programs encouraged the divisions of labor and identity and undercut domestic workers’ organized efforts during the 1930s to win inclusion in New Deal programs regulating labor conditions. Aided by less powerful black civil rights groups, without the assistance of trade unions or women’s clubs, domestics failed to win legal protections and the legal authority and self-respect these brought to covered workers. The author also reveals how middle- class women responded ambivalently to the call to aid women workers when labor reforms threatened their domestic arrangements.

Throughout her study, Palmer questions why white middle-class women looked to new technology and domestic help to deal with cultural demands upon "the perfect housewife" rather than expecting their husbands to help. When the supply of servants declined during the 1950s, middle-class housewives were left isolated with lots of housework. Although they rapidly followed their servants into paid work outside the home, they remain responsible for housework and child care.

In the series Women in the Political Economy, edited by Ronnie J. Steinberg.

"Palmer examines how white women learned their whiteness and how domestic service degraded working-class women...while it elevated the status of middle-class women. She concludes with a sophisticated analysis of dichotomies between good and bad, clean and dirty, pure and sexual women, infusing her history of gender, race and class subordination with contemporary feminist object relations theory." —Women's Review of Books

"Phyllis Palmer examines how middle-class women took jobs outside the home and hired servants—mostly women of color—to run their households.... Her ground-breaking study, drawing on home economic texts, government-funded domestic training course manuals, novels, films and magazine articles, shows how this perpetuated the myth of the perfect housewife and did not challenge men to join in running the home. Unflinching in her analysis of domestic workers' subjugation and lack of power or protection." —New Directions for Women

"[Palmer's] work is path-breaking.... [She] is right on target in focusing on the contradictions that have lain at the heart of our national domestic life." —The Washington Post

Preface
Acknowledgments
1. Domestic Work Between the Wars
2. The Housewife in a Modern Marriage
3. The Businessman's Wife at Work
4. The Domestic Does Her Job
5. Education for the Vocation of Housework
6. Negotiating the Law of Service
7. Dirt and Division Among Women
Afterword
Notes
Index