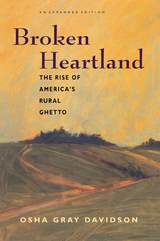 Between 1940 and the mid 1980s, farm production expenses in America's Heartland tripled, capital purchases quadrupled, interest payments jumped tenfold, profits fell by 10 percent, the number of farmers decreased by two-thirds, and nearly every farming community lost population, businesses, and economic stability. Growth for these desperate communities has come to mean low-paying part-time jobs, expensive tax concessions, waste dumps, and industrial hog farming, all of which come with environmental and psychological price tags. In Broken Heartland, Osha Gray Davidson chronicles the decline of the Heartland and its transformation into a bitterly divided and isolated regional ghetto. Through interviews with more than two hundred farmers, social workers, government officials, and scholars, he puts a human face on the farm crisis of the 1980s.

In this expanded edition Davidson emphasizes the tenacious power of far-right-wing groups; his chapter on these burgeoning rural organizations in the original edition of Broken Heartland was the first in-depth look—six years before of the Oklahoma City bombing—at the politics of hate they nurture. He also spotlights NAFTA, hog lots, sustainable agriculture, and the other battles and changes over the past six years in rural America.

Preface
Acknowledgments
Decline and Denial
Roots of the Farm Crisis
The Rise of the Rural Ghetto
Poverty and Social Disintegration
The Dying of the Light
The Growth of Hate Groups
The Second Wave
What Future, What Hope?
Coda: 1996
Notes
Bibliography
Index