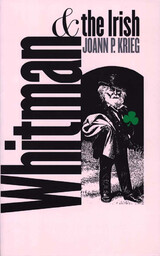 Though Walt Whitman created no Irish characters in his early works of fiction, he did include the Irish as part of the democratic portrait of America that he drew in Leaves of Grass. He could hardly have done otherwise. In 1855, when the first edition of Leaves of Grass was published, the Irish made up one of the largest immigrant populations in New York City and, as such, maintained a cultural identity of their own. All of this “Irishness” swirled about Whitman as he trod the streets of his Mannahatta, ultimately becoming part of him and his poetry. As members of the working class, famous authors, or close friends, the Irish left their mark on Whitman the man and poet. In Whitman and the Irish, Joann Krieg convincingly establishes their importance within the larger framework of Whitman studies.

Focusing on geography rather than biography, Krieg traces Whitman's encounters with cities where the Irish formed a large portion of the population—New York City, Boston, Camden, and Dublin—or where, as in the case of Washington, D.C., he had exceptionally close Irish friends. She also provides a brief yet important historical summary of Ireland and its relationship with America.

Whitman and the Irish does more than examine Whitman's Irish friends and acquaintances: it adds a valuable dimension to our understanding of his personal world and explores a number of vital questions in social and cultural history. Krieg places Whitman in relation to the emerging labor culture of ante-bellum New York, reveals the relationship between Whitman's cultural nationalism and the Irish nationalism of the late nineteenth century, and reflects upon Whitman's involvement with the Union cause and that of Irish American soldiers.

Joann Krieg is professor of English at Hofstra University. She is author of A Whitman Chronology (IOWA, 1998) and editor of Walt Whitman, Here and Now.