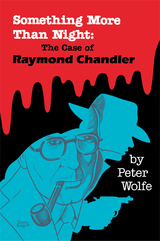 Raymond Chandler’s eminence as a mystery writer is unchallenged. Somerset Maugham and George Grella both rate him above Dashiell Hammett; Eric Partridge deems him “a serious artist and a very considerable novelist,” while praising him as “one of the finest novelists of his time.” Peter Wolfe examines the many sides of Chandler and his work—his apparent will to self-destruct, his obsession with beautiful women, and his apparent brush with homosexuality—and casts much new and needed light on this major American author.