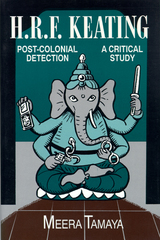 In Keating’s novels, set in India, the bumbling, but always human, Inspector Ghote manages to solve crimes with a post-colonial mix of inherited Scotland Yard/Holmesian deductive methods and his understanding of his native country’s culture. This book is based on the premise that successful sleuths have much in common with cultural anthropologists—indeed the latter have often been termed detectives of cultures. Keating’s Ghote novels are in the tradition of Tony Hillerman’s Navajo Indian mysteries, and James McClure’s South African novels, which serve up the human, experiential aspects of the cultural and ethnic conflicts that newspapers miss.