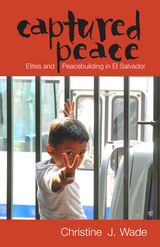 El Salvador is widely considered one of the most successful United Nations peacebuilding efforts, but record homicide rates, political polarization, socioeconomic exclusion, and corruption have diminished the quality of peace for many of its citizens. In Captured Peace: Elites and Peacebuilding in El Salvador, Christine J. Wade adapts the concept of elite capture to expand on the idea of “captured peace,” explaining how local elites commandeered political, social, and economic affairs before war’s end and then used the peace accords to deepen their control in these spheres.

While much scholarship has focused on the role of gangs in Salvadoran unrest, Wade draws on an exhaustive range of sources to demonstrate how day-to-day violence is inextricable from the economic and political dimensions. In this in-depth analysis of postwar politics in El Salvador, she highlights the local actors’ primary role in peacebuilding and demonstrates the political advantage an incumbent party—in this case, the Nationalist Republican Alliance (ARENA—has throughout the peace process and the consequences of this to the quality of peace that results.

Christine J. Wade is associate professor of political science and international studies at Washington College. She is the coauthor of Understanding Central America: Global Forces, Rebellion, and Change and Nicaragua: Living in the Shadow of the Eagle.