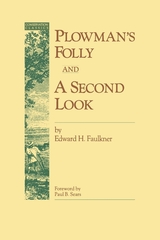 Plowman's Folly and A Second Look
by Edward H. Faulkner
introduction by Paul B. Sears
preface by Edward H. University of Oklahoma Press

As the ruinous Dust Bowl settled in the early 1940s, agronomist Edward Faulkner dropped what Nature magazine termed "an agricultural bombshell" when he blamed the then universally used moldboard plow for disastrous pillage of the soil. Faulkner's assault on the orthodoxy of his day will stimulate today's farmers to seek out fresh solutions to the problems that plague modern American agriculture. Plowman's Folly is bound together here with its companion volume A Second Look.
AUTHOR BIOGRAPHY
Edward H. Faulkner (1886-1964) was a personable gentleman from Elyria, Ohio who worked as an agricultural agent in the upper Ohio and Erie basins. After witnessing the soil being 'worn-out', Faulkner's concern with a 'problem vital to Man's survival on this planet' led him to search, through observation and experimentation, for ways to care for the soil. Faulkner's genius was to question the use of the plow. He came up with the remedy of using the 'disc plow', which cuts up and incorporates organic matter into the soil, rather than burying them deep in the subsoil, insuring healthy and fertile soil.

Faulkner was one of the first true conservationists. His ideas were considered 'mad' and without merit, until after his death when soil experts and scientists began to admit 'We didn't pay attention, and we should have.'