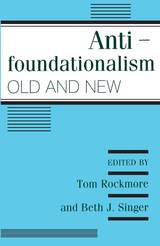 "[The book] illuminate[s] the philosophical urge to attain certainty and system, and especially system that is based on certain and indubitable ground. The historical approach works well.... This collection makes no pretensions, yet manages to deliver important contributions to the continuing inquiry."

The debate over foundationalism, the viewpoint that there exists some secure foundation upon which to build a system of knowledge, appears to have been resolved and the antifoundationalists have at least temporarily prevailed. From a firmly historical approach, the book traces the foundationalism/antifoundationalism controversy in the work of many important figures--Animaxander, Aristotle and Plato, Augustine, Descartes, Hegel and Nietzsche, Habermas and Chisholm, and others--throughout the history of philosophy. The contributors, Joseph Margolis, Ronald Polansky, Gary Calore, Fred and Emily Michael, William Wurzer, Charlene Haddock Siegfried, Sandra B. Rosenthal, Kathleen Wallace, and the editors present well the diversity, interest, and roots of antifoundationalism.
TABLE OF CONTENTS
Contents
ACKNOWLEDGMENTS
INTRODUCTION
One The Limits of Metaphysics and the Limits of Certainty
Two Foundationalism in Plato?
Three Foundationalism and Temporal Paradox: The Case of Augustine's Confessions
Four Hierarchy and Early Empiricism
Five Hegel, German Idealism, and Antifoundationalism
Six Nietzsche and the Problem of Ground
Seven Like Bridges without Piers: Beyond the Foundationalist Metaphor
Eight Pragmatism and the Reconstruction of Metaphysics: Toward a New Understanding of Foundations
Nine Metaphysics without Mirrors
Ten Metaphysics and Validation
ABOUT THE CONTRIBUTORS
INDEX OF NAMES
INDEX OF TITLES
REQUEST ACCESSIBLE FILE